The winners of the 2022 Neighborhood Summit Community Awards 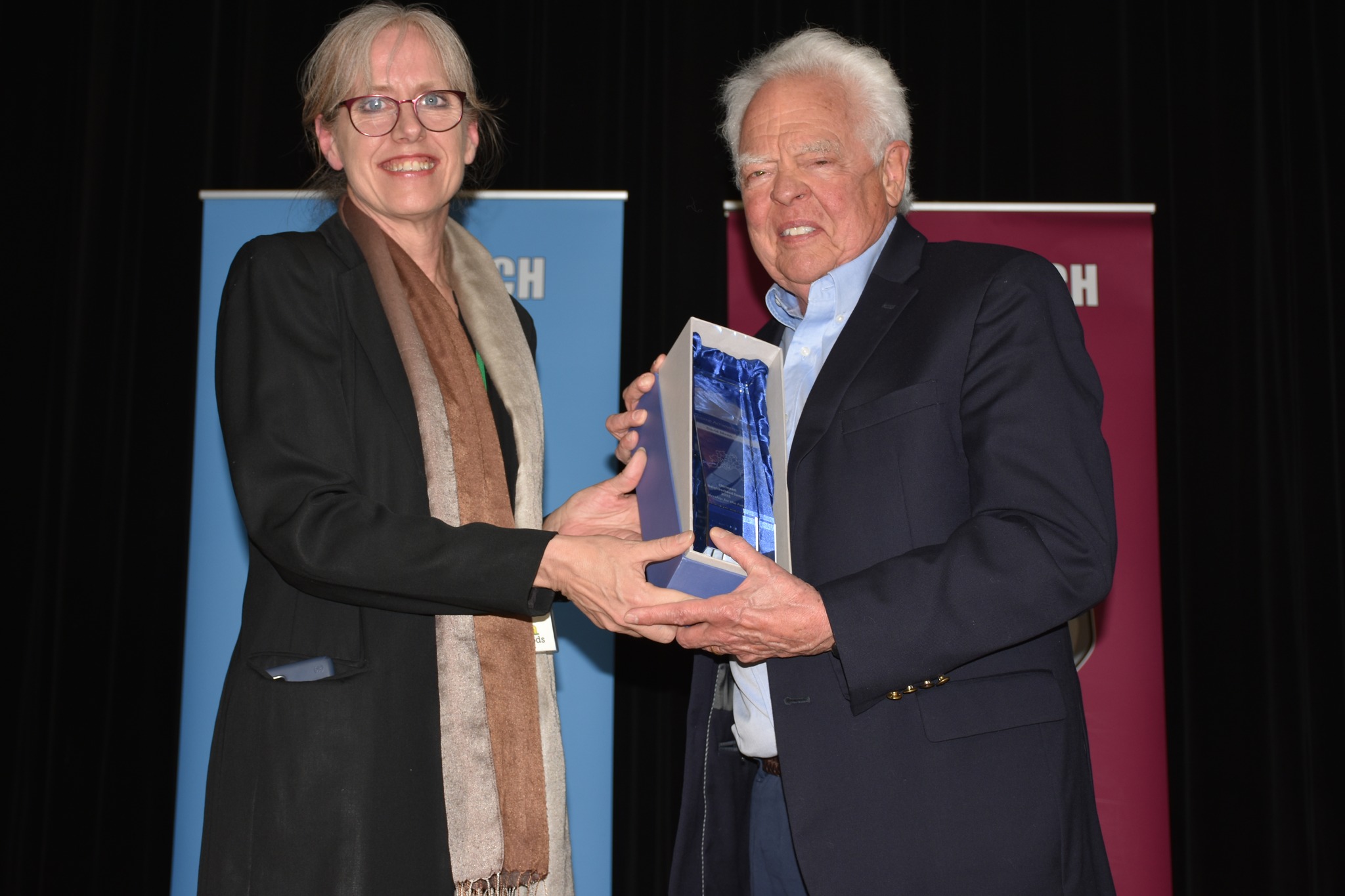 David Mann has been a dedicated public servant throughout his lifetime.  He served on Cincinnati City Council for 24 years, including 3 as Mayor.  Most recently, after being elected in 2017, David was the Chair of the Neighborhoods Committee and then helped steer the City through the COVID crisis as Chair of Budget and Finance.  David was also elected to the 103 Congress as the representative from Ohio’s 1st Congressional District, which then included most of the City.

David’s earliest public service was serving in the United States Navy for four years, As a lieutenant, David served on the U.S.S. English, a destroyer that was one of the first ships to reach Cuban waters during the Cuban Missile Crisis.

David’s role as a civic leader has included involvement in a number of charitable
organizations: for two years he was chairman of the board of The Hearing, Speech and
Deaf Center of Greater Cincinnati; he spent 10 years on the board of the Freestore
Foodbank and served as chairman of the board of his church, Clifton United Methodist.
David also served as the co-convener of Beyond Civility, an initiative to improve public
discourse on civic issues. Public response to this initiative was tremendous.

David is a true public servant and Cincinnati has benefited from his years of service.

This award is given to an individual, inside or outside of a community organization, whose life and work has benefited all of Cincinnati, through creating inclusiveness, increasing the viability of community activities and organizations, and supporting neighborhoods and neighborhood leaders. 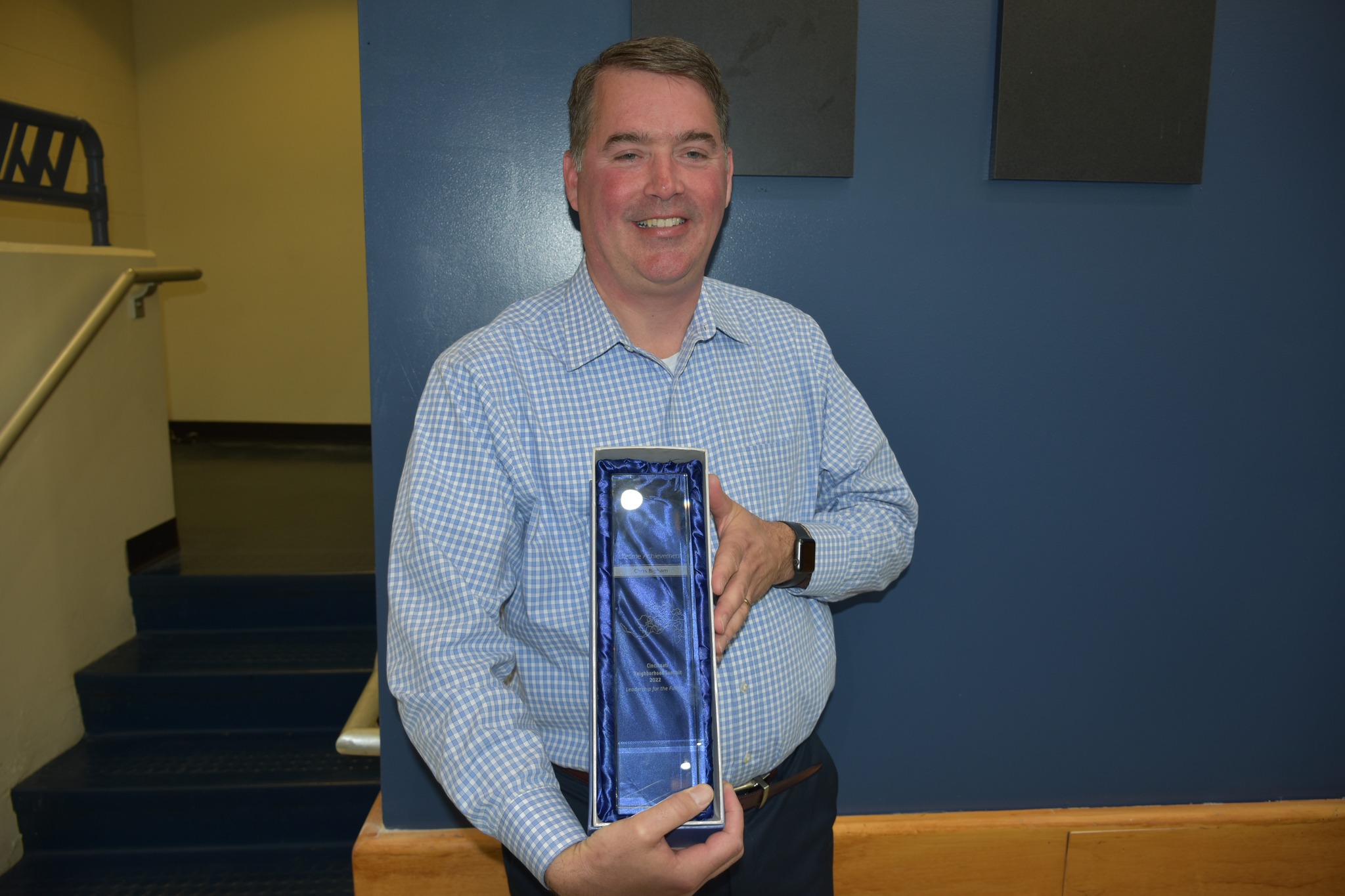 It might seem like Chris Bigham was with the City as long as David – maybe not quite, but he has had a long career with the City which was marked by leadership, accomplishment and hard work.  Most people in the neighborhoods came to know Chris in his role as the Department Director of the Cincinnati Recreation Commission, where he brought a renewed focus and energy to the vital role of the Rec Centers in our neighborhoods, creating a long lasting strategic plan and partnerships and collaborations that expanded programming and made a real impact.  His passion and enthusiasm for the Recreation Commission was clear  – but who knew he was such a wonk?  He left Rec in 2014 to become first the Budget Director and then Assistant City Manager acting as the City’s Chief Financial Officer.   His work as Budget Director will be remembered by many of us as the first time that the community was engaged in understanding the budget process through education and programs for the neighborhoods to participate in.  Finally, Chris must be commended for the extremely hard work of navigating the City through the COVID crisis – not only the budget crisis, but working with OPDA and various departments for tracking PPE, employees in quarantine, and presenting bi-weekly presentations to Councilmembers on the status of the pandemic.

Although we will miss him at the City, we wish him the best for his new venture as Special Advisor with Management Partners where he will take his wisdom, his cheer, and his unflappable personality to other cities across the country

3. Community Catalyst of the Year

An individual in a community organization whose energy and ideas led to a project or program that gets community members involved and excited, that produces good outcomes and results in increased neighborhood engagement 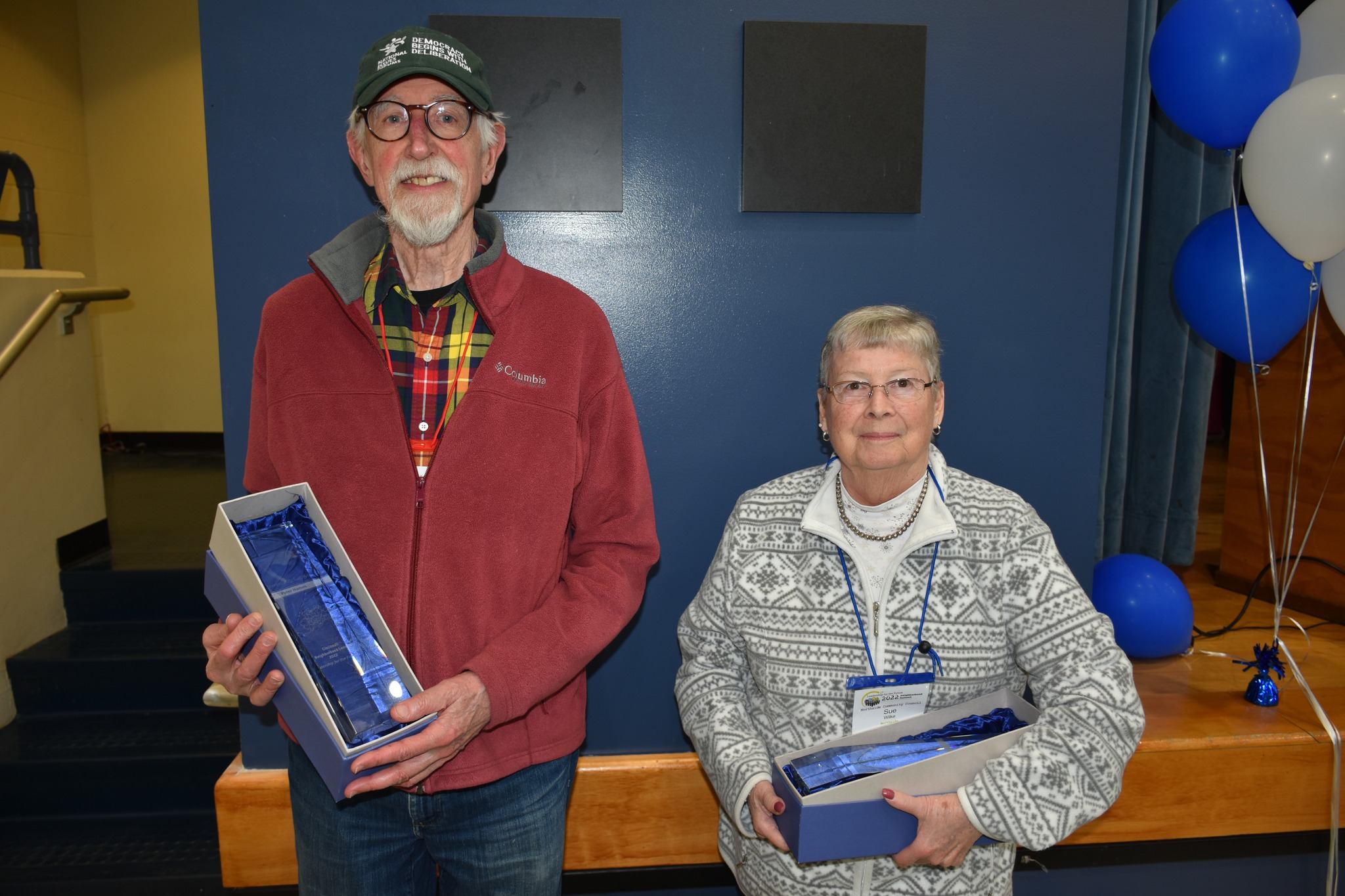 Although co-winners Peter and Sue are well-known community and neighborhood activists, with years of service to their neighborhoods, we felt we should recognize their dedication and persistence to community engagement which got the Community Engagement Ordinance passed last fall.  They were the leaders who worked with the neighborhoods and City Council to get the original the original motion that created the policies and principles for Community Engagement in 2014, and worked tirelessly and continued to push to get this motion passed as an Ordinance.  As an ordinance it creates the foundation for Community Engagement throughout the City and will be the bedrock and the guidepost for good governance.

We know they are not done and they will continue to advocate and educate for the continual improvement in community engagement between the City and the citizens, however, we sincerely wanted to thank them and call out this achievement.

3. Rookie of the Year
With this new award, we recognize that hard work and dedication to positive change in our neighborhoods isn’t just something undertaken by the old hats and hands. This award is for the  newcomers who are bringing passion, fierce commitment, and new forms of organizing and activism to make our city a better place for all 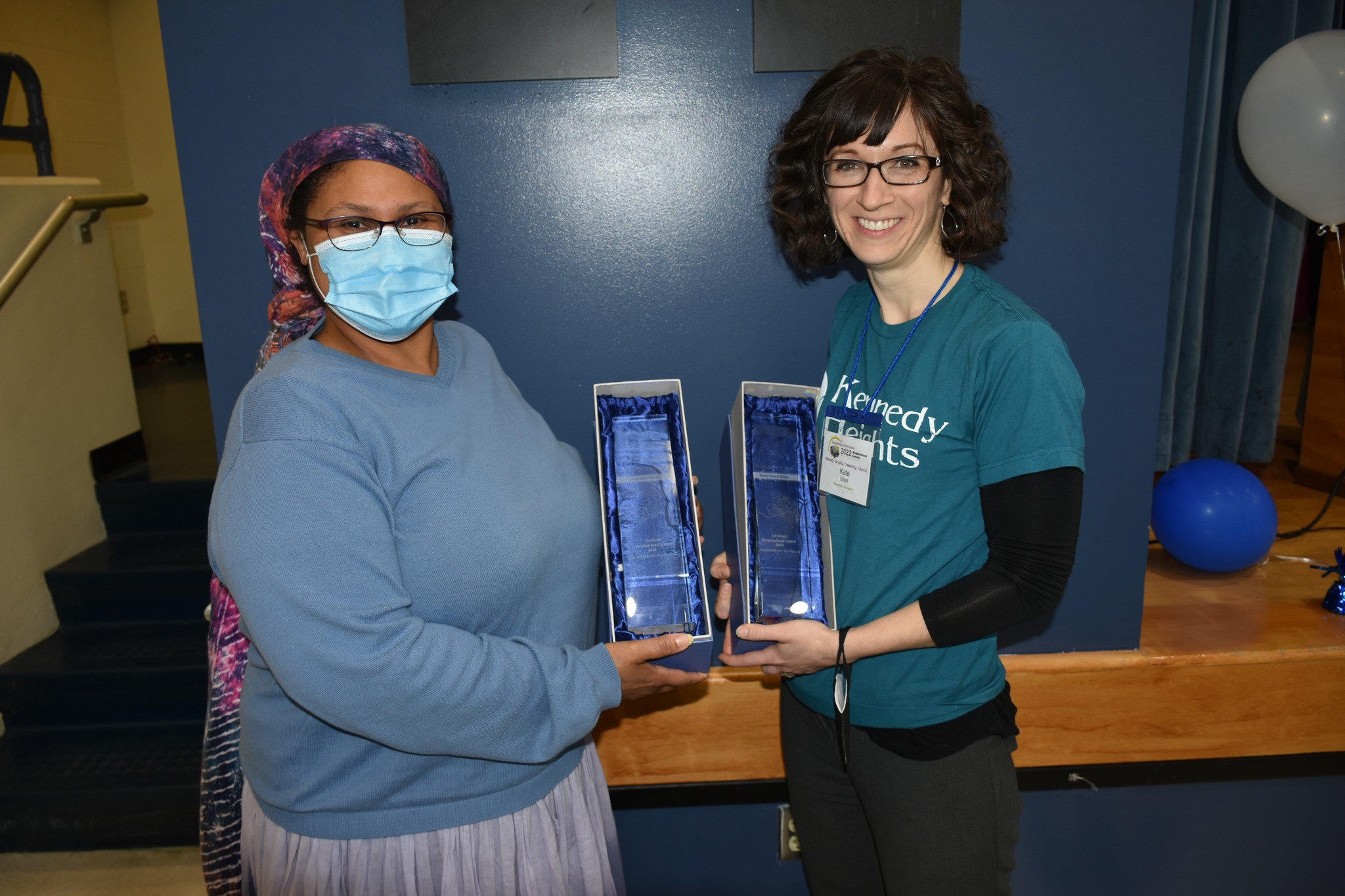 This year, we are interpreting “Rookie” loosely to highlight a new model for Community Councils, that of ‘Co-Presidents”, started in 2019 by the Kennedy Heights Community Council.  Kate and Sharifah embody the inclusive nature of Kennedy Heights to embrace all ages, races, and backgrounds.  By day, Kate is a musician and artist, and Sharifa runs the Caring Place.  Kate is energetic and busy, loves running a meeting and works hard to engage the community and make sure everybody is included and heard.  Sharifah is measured and calm, keeps in contact with the community partners, and keeps things moving behind the scenes. They are a great pair and a great example of how to get the most out of a volunteer position.

4. New Leadership for the Future Award
We are always on the lookout for new leaders in our community –  leadership that demonstrates creativity in solutions that can be transformative and sustainable for the future. This award is for an individual or a collaboration of people or an organization that has made an impact in new or unexpected ways which will carry forward into making our city a better place into the future.

Christian Huelsman, founder and Executive Director of “Spring in Our Steps” 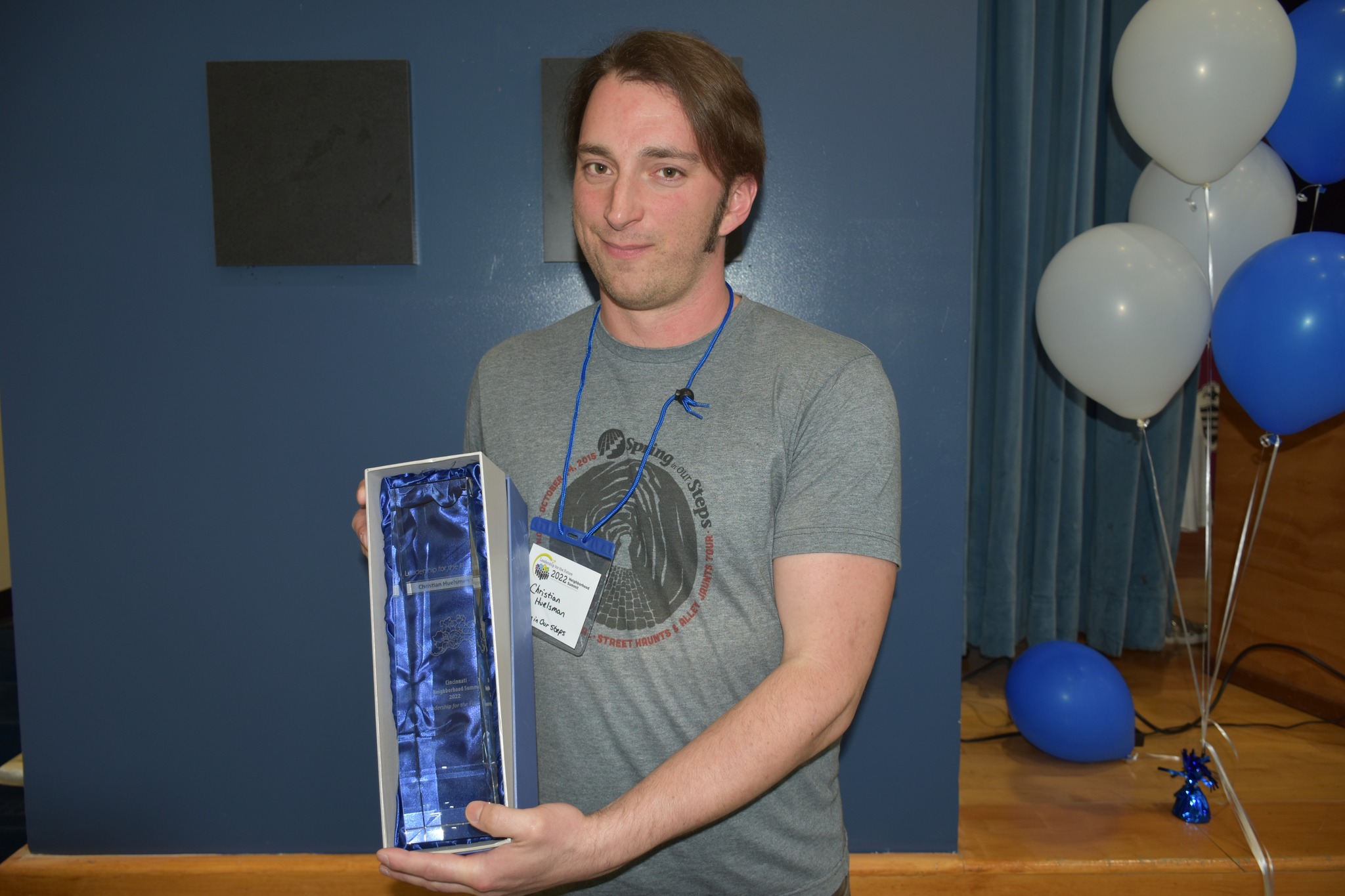 Christian Huelsman works to build transformative projects at the community level. His best-known efforts have been accomplished through the organization he co-founded, Spring in Our Steps. From cleanup events to pop-up activities, historic research to advocacy, Christian’s work promotes safer walking along Cincinnati’s public corridors, alleys, and stairways.  Enhancement of these community connections allows all Cincinnatians to have safe, equitable choices to travel on foot.  Spring in Our Steps recently celebrated a decade of achievements, having initiated nearly 200 cleanup projects, pop-up events, and walking tours along alleys and stairways and working to promote better walking conditions in over 20 neighborhoods, including: 7 neighborhood alleys in Northside; establishing the Stairway & Alley Signage Project, aiding users at public stairways along the Mulberry Street gateway between Mount Auburn and Over-the-Rhine with high visibility, pedestrian scaled signage; bringing improvements to the Bolivar and Levering Alleys corridor in Pendleton; and partnering with South Fairmount Community Council to initiate the cleanup of more than ten public stairway connections, to encourage safer walking between neighborhood streets and both transit stops and the Lick Run Greenway. He’s currently working on projects in Mt Adams, CUF, and North Fairmount and looking at the step connectors along Queen City. Chris is currently working on his MCP from UC with a certificate in Public Art and Placemaking and we know he will continue to see his leadership in creating a brighter future to the city’s most neglected public spaces.